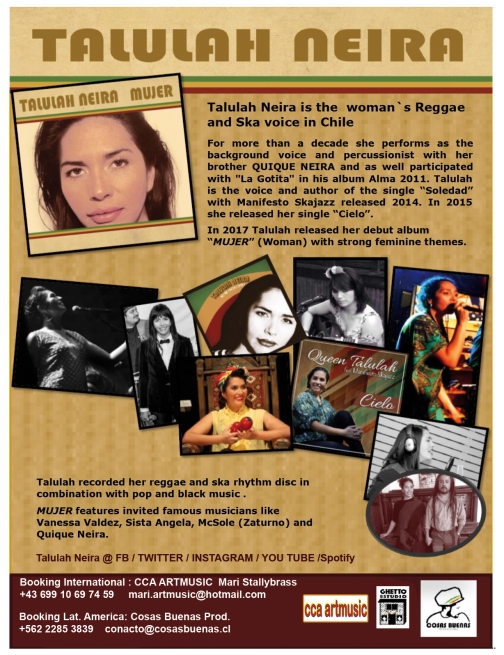 “Alma” (soul) is the energy of all of us, what makes us unique … what connects us to God,“ says Quique.

ALMA – his sixth production as a solo artist – is certainly the musician’s most mature and personal one.
The album includes some great guest musicians’ performances like the ones of David Hinds of Steel Pulse (Love, Love, Love), Alborosie (Yo Planto), Dogge Doggelito (Ojo) amongst others, conferring the disc internationality.
ALMA, issued under the Chilean label Oveja Negra, contains 20 tracks. Quique Neira composed and recorded ALMA in his own studio, Madera & Agua, in Santiago/Chile, but it has as well been recorded in various studios e.g., in Austria, Switzerland, England, Puerto Rico, Venezuela, Sweden, Jamaica. The album was mastered by Jim Fox in Washington, D.C., U.S.A.

Quique Neira  (Chile)  the charismatic Icon of Latin Reggae has risen to legendary status in Latin America’s Reggae circles since the 1990’s – His mellow mix of Roots Rock Reggae and Latin rhythms has drawn hundreds of thousands enthusiastic audience  to clubs and large Festivals in Latin America.
Now as well in Europe.

Quique Neira has a unique voice and is a great live musician, composer and producer.

With his solo albums, he always gets the charts in his homeland.-